My name is Josie Young, I am a writer, a community worker, an activist and a lover of all things chocolate and coffee related. More importantly however I am a mother, I have a son named Mandela.

As a mother I want to make sure that everything I do – the words I write, the food I cook, the causes I support – makes my son’s future brighter. In 2014, I decided I would start this blog as another forum through which I can fight for the future that my son deserves.

One day, in the future, my five year old son Mandela will look at the world and ask me, “Mama, how could you have stood by and done nothing in the face of such injustices?”

When that day comes, I hope I will be able to answer him.

Mandela will be referring to the demonization of asylum seekers, the neglect of women and children in conflict zones around the world, homelessness in Australia, the exploitation of child soldiers globally, and the desperate poverty that so many people still suffer.

Mandela will say, “Mama, we learned at school that there is enough food and medicine in the world for everyone. If kids know this, then the Australian Government and the voters in Australia must also know this. You must therefore know how to fix the problems.” Mandela will then want to know, “Why did all the Mums and Dads in Australia let all this bad stuff keep happening?”

When Mandela asks me this I want to give him a better answer than “Um…. because it was too hard to talk about,” or “it wasn’t my job….”

I believe that every man, woman and child on this earth is equally deserving of opportunity, love, security and identity, and I have always endeavoured to pass this belief onto my son. Unfortunately, as Mandela will soon learn, these basic human rights are not being provided for too many people across the planet. I also believe that everything we do in Australia is connected to the rest of the world, whether it is:

Australians profit enormously from our neighbours overseas, but often we lack the capacity to see their sufferings as our own. We somehow fail to see our obligation to serve and assist, particularly when it comes to accepting refugees and asylum seekers. I believe this is because we are not aware of who these people are, the lives they have lived, or the histories we share. I understand that the pictures we see daily in the media often cast fear into our hearts. They lead us to believe that we will be disadvantaged by the intake of humanitarian entrants, or telling us that people are arriving ‘illegally’ or are ‘receiving huge governments pay outs.’ All of which is quite untrue. And contributes to a hostile global environment in which people cannot live and grow freely and equally.

This is, in short, why I write. I hope and pray that once Australians understand and are open to the diversity and unique challenges faced by our neighbours, then perhaps we might be able to build a future Australia which is more compassionate and outward thinking.

As parents, we have the unique privilege and duty to be a part of creating a better tomorrow for our children. By teaching our children compassion, understanding and critical thinking we provide them with the tools they need to make the world the wonderful place it could be. I hope that by writing and talking more about the issues that matter to humanity – I say humanity, rather than “Australia”, because I firmly believe we are members of a global community and can no longer hide behind national boundaries/national interests when it comes to social justice – the I can in some way influence the discussion and change that will make Mandela’s future brighter. 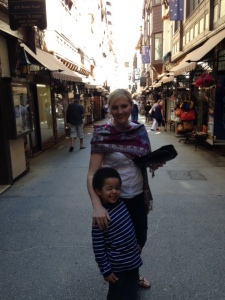 Mandela, and every other child on earth, deserves a bright future. As Mandela’s mother, it is my obligation to ensure Mandela’s future, which includes, fighting for a more just world for him to grow in. 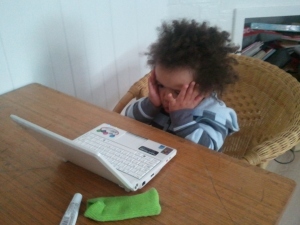 Mandela was watching a slide show I had put together about development overseas. Mandela loved the music, and referred to the children in photograph as “my friends.”

When I write, my words do not come from a religious place, nor do they have an agenda other than to promote cross-cultural understanding and hope for a better tomorrow. Due to the nature of some of the topics discussed however, religion is often mentioned.

Josie Young holds a Bachelor of Arts in International Relations and Public Policy (2007), and a Masters of International and Community Development (2009).

5 thoughts on “A Duty to Our Children”